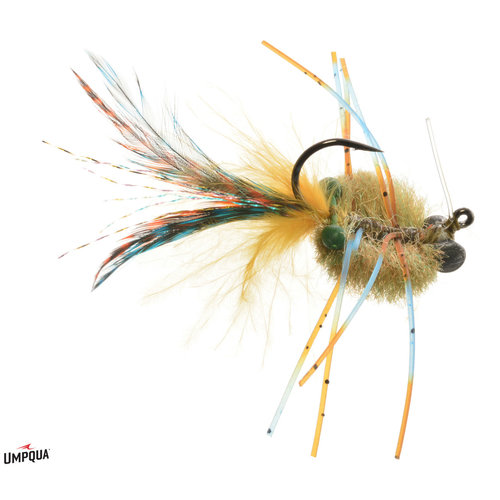 Target species of the “POP-UP CRAB” are redfish, striped bass, permit and bonefish. The TAN variation should be used in mottled sand environments Read more

"Of the myriad crab patterns that we have designed and that have been fished successfully, the “POP-UP CRAB” is arguably our best creation to-date. Done in the Del Brown Merkin Crab style and using H2O Fishient Sculpting Fibers as the body components, which in this designer’s opinion are by far the best materials for tying this style of crab and are also available in a superior color array. The three colors offered very effectively cover the complete global flats bottom color spectrum over which this pattern is to be fished and which also mimic the naturals subtle color variations (crab sub-species) which inhabit these specific venues.

Target species of the “POP-UP CRAB” are redfish, striped bass, permit and bonefish. The TAN variation should be used in mottled sand environments which often transitions to a marl bottom, the OLIVE variation mimics the Green Reef Crab, the prevalent crab species found to inhabit most grass covered  flats such as those in Belizean, Honduran and other Caribbean waters, and finally the BLUE CRAB variation is meant to mimic the Blue Crab, the prevalent species inhabiting the Gulf and Atlantic coasts  Also, the silicone legs used on the SAND, TAN and BLUE CRAB variations were personally developed by this designer  and are being commercially produced by Living Rubber.

Aside from the spectral color offerings, the truly revolutionary aspect of the “POP-UP CRAB” is the incorporation of a 60 degree (swimming) jig hook to which the lead dumbbell weight is attached on the bottom of the shank bend which effectively lets the pattern balance vertically on this fulcrum and hop up and down from a pronated position when retrieved.  This dynamic is impossible to create with the use of a 90 degree jig hook because this more acute angle causes the pattern to “drag” in a horizontal position on retrieve. The beauty of the dynamics of the 60 degree swimming jig hook is that when in the prone position while being retrieved, any subtle bottom contour will cause the fly to hop up to a horizontal position which  causes the pattern to assume a defensive posture and appearance further “exciting” the predator instinct of the targeted species. The size #4 is meant to be used in shallow environs which potentially require a “softer” water entry and the size #2 should be used in deeper water in which a quicker sink rate is preferred and stealth is not a critical element."